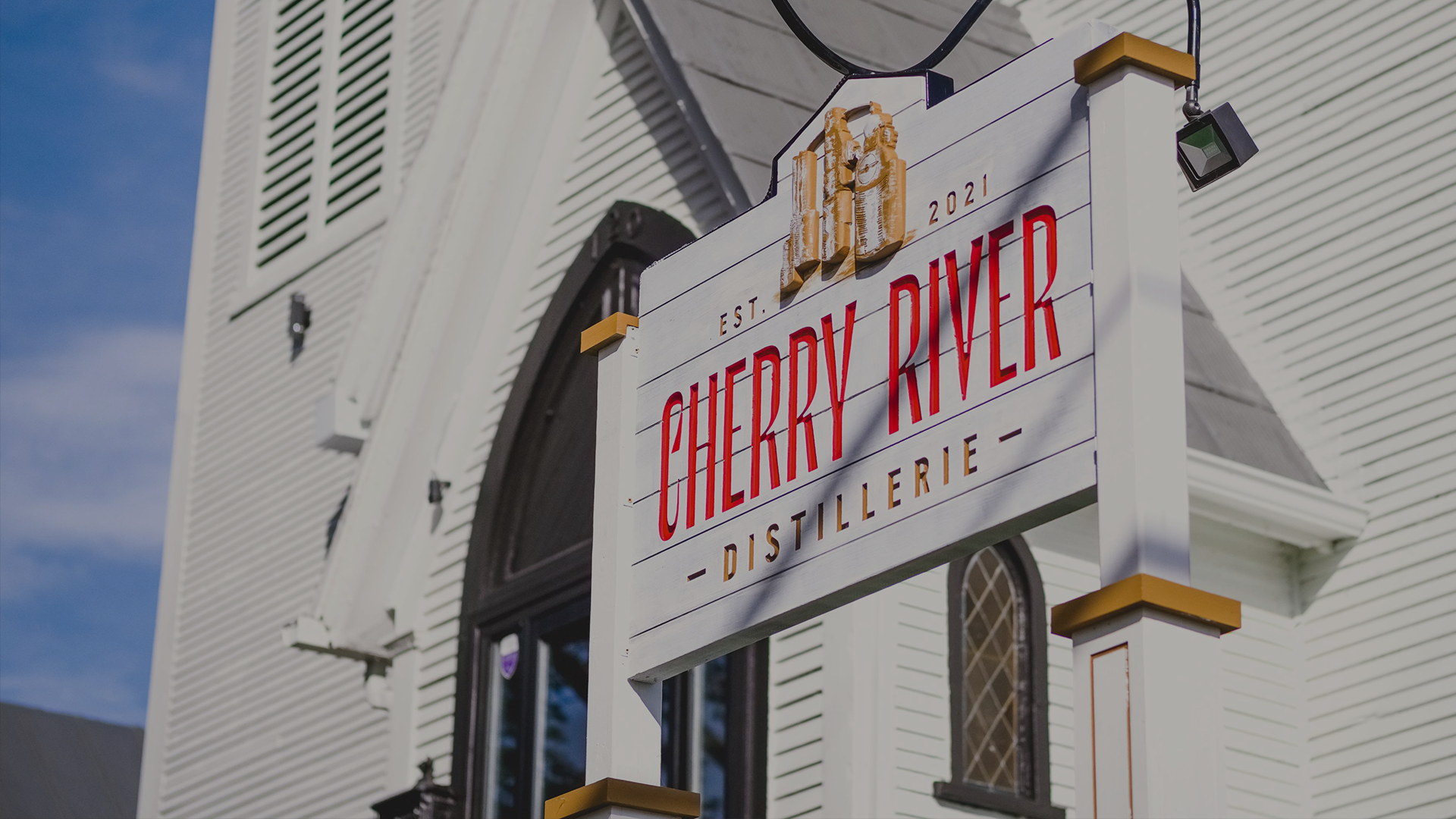 Come and meet us to visit our facilities and taste all our excellent products. It will be our pleasure to make you taste our spirits and show you how they are made. All this in the majestic setting of an old church with over 150 years of history.

At Cherry River, we are happy to belong to the new generation of Quebec distillers. We distil gin, we blend vodka, we produce alcoholic sparkling waters and a whole collection of bitters with ample and generous aromas.

United by the love of spirits and creation, our team takes real pleasure in crafting all the flavor of Cherry River products and has made it its mission to do so by exploiting, with respect, all the richness of the aromatics. from here as well as years of tradition, in order to offer products made from selected ingredients that reveal the identity of a region.

Cherry River, a name and a legend

Cherry River is the name of the river that crosses Mont-Orford Park and flows into Lake Memphremagog and the small village at the foot of the ski slopes.

An Abenaki legend claims that the first cherry tree in North America was planted by the great Manitou at the top of Mount Orford. From there, the cherries would have rolled down the mountain and fallen into the river. The first inhabitants of this region would then have named Cherry River, the river and the village they founded.

A BIT OF HISTORY…

In 1680, the Abenaki, evicted from their ancestral lands in New England, arrived in the Eastern Townships. They come and go to trade furs in the St. Lawrence Valley and visit their establishments. They bequeathed many names to us: Magog, Memphremagog, Massawippi and Coaticook.

The Township or Canton of Orford was born from the county of Buckinghamshire in 1792 and was granted in 1801 to Jonathan Ball, an American. It then extends eastward to the confluence of the Magog and Saint-François rivers, a territory three times larger than today.

The name of Orford is part of the toponymic approach of the surveyors of Lower Canada in the designation of Townships. Orford evokes the name of a coastal village in the county of Suffolk, England and although we find the names Oxford and Orford on old maps of the region; the name Orford was assigned to the lake in 1831, to the municipality in 1855 and to the mountain in 1863.

It is during the 19e century that British immigration to the Township of Orford was orchestrated by the British American Land Company. The newcomers, Loyalist pioneers, who came to settle then developed the village of Cherry River, building a church, school and post office there. It's the 20the century that will welcome Francophones who come to settle.

At the end of the 1920s, Dr. George A. Bowen, former mayor of Magog, wanted to make Mount Orford a protected park. He will work for nearly 20 years to promote the tourist attraction of the place to rally influential economic players to his project. 1938, will constitute for this visionary a victory, since the provincial government will establish the Mont-Orford Provincial Park. Twenty-seven municipalities in the region will be involved in fundraising for the acquisition of the land, a process that will take nearly four years. It is during this period that the road will be traced that will join the village of Cherry River and the magnificent Mount Orford.

0
Your cart is empty